This time we go to Africa! The occasion is the Next Einstein Forum 2018 to be held in Kigali in Rwanda on March 26, 27 and 28, 2018. The Next Einstein Forum (NEF) is an initiative of the African Institute for Mathematical Sciences (AIMS) in collaboration with Robert Bosch Stiftung. The NEF is a platform that aims to connect science, society and politics in Africa and the rest of the world, with the aim of exploiting science for human development on a global level.

The fundamental idea of ​​the project is that Africa can be an active member of the global scientific community to contribute to global progress. Central to the NEF's efforts are young Africans, the driving force behind the scientific renaissance of Africa.

After seeing the show in Brussels (Belgium), the organizers of the NEF have selected The Principle of Uncertainty as an example of theater that can also tell the wonders of science and its mechanisms and consequently offer an important stimulus to interpret life and contemporaneity.

The show will be staged on March 27 and 28, 2018 (more than 1300 delegates from all over the world are expected). Other performances of the play, in its "light" version, have been organized in several schools in rural Rwanda.

In order to present the show we have posted an article on the Blog page of the NEF2018 web site: HOW CAN THEATRE SPARK THE LOVE FOR SCIENCE?
In it it is possible to find much of the philosophy that motivates the JPT Project.

Le Principe de l’Incertitude premiers at the University of Namur

Le Principe d'Incertitude, the french version of The principle of Uncertainty, will be staged on March 23rd 2018 at the Printemps des Sciences, a science popularisation week organised by the science faculties of 5 universities in the Wallonia Brussels Federation (UCL, ULB, UNamur, UMons and UniLiège), united in the network known as sciences.be.

It is a very exciting news for us, because it is the very first time that a JPT play is staged in a language that is not English or Italian. The idea is to setup, in time, a JPT Belgium Hub. The translation of the text has been done by Pierre Echard, the actor Vincent Vanderbeeken will be on stage. The directing is by Andrea Brunello.

As is the custom with JPT performances, in order to highlight the scientific content of the play, this show will be followed by a debate with the audience, which will be moderated by Dr. Luc Henrard, professor in the Physics Department, and an assistant professor in the Quantum Mechanics course, Mathilde Remy.

This performance has been actively promoted by the University of Namur's Confluent des Savoirs, by the engaged professors who will animate the debate, by the Compagnia Arditodesìo via its Belgium mailing list and social networks, as well as by Pierre Echard, in charge of JPT's international development, and based in Brussels.

Among the key target audiences are the schools, theatres, cultural centres and other organisations which will be the future be the hosts of JPT productions in the Wallonia Brussels Federation.

The performance has been made possible in part by a generous grant by the King Baudouin Foundation.

Here is the info regarding the event!

For the second year in a row the Arditodesìo Theatre Company | Jet Propulsion Theatre has collaborated in the the organization of the Teatro della Meraviglia Festival (#MeravigliaTeatroFestival). At the heart of the Festival is the idea that science and theatre can meet and in fact they should do so in trying to bring high quality theatre performances to the stage, where the themes are drawn from scientific issues.

The result was extremely exciting: 9 full days of shows, 1700 people attending, many high school and university students and lots of creative energy have characteized the events. More than 30 young volunteers have helped run the events as smoothly as possible. All in all this second edition of the Festival has been a success and we are already looking forward to the all brand new 2019 edition... 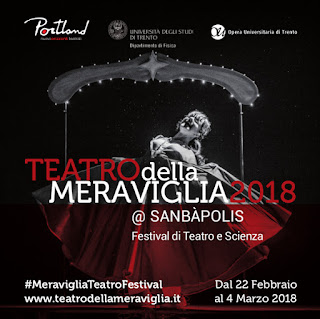 We, Robots is a JPT production that premired in Milan - Italy in January 2018 (at PACTA . dei Teatri). It is the fourth production and maybe the one that strays more from a purely scientific background to move towards a more phylosophical terrain. The bottom line is: can love exist between a human being a highly intelligent machine?
The play has generated interest in all kinds of fields and situations: from the general theatre environment to the science festivals and museums.

Here are some reviews.